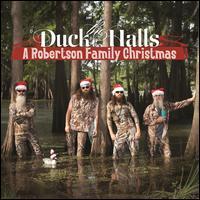 The Robertsons aren't a musical group or band but are instead the family behind Duck Commander, an enterprising family-owned business out of West Monroe, Louisiana that makes products, most notably duck calls, for duck hunters. The Robertsons, primarily brothers Phil and Si, plus Phil's sons Jase, Willie, and Jep, are also known for their iconic long beards and the reality television series Duck Dynasty, one of the most popular shows ever to air on the A&E television network. The family has spun the show into several other enterprises, including a holiday album, Duck the Halls: A Robertson Family Christmas, which appeared in 2013 and featured versions of traditional Christmas songs and a few family originals done with the help of guests like Luke Bryan, Josh Turner, George Strait, and Alison Krauss, all done with a dose of the down-home humor the show is famous for. ~ Steve Leggett, Rovi