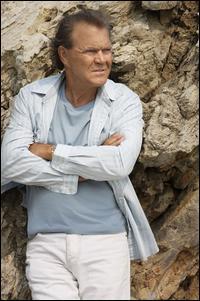 It isn't accurate to call Glen Campbell "pure country," but his smooth fusion of country mannerisms and pop melodies and production techniques made him one of the most popular country musicians of the late '60s and '70s. Campbell was one of the leading figures of country-pop during that era, racking up a steady stream of Top Ten singles, highlighted by classics like "By the Time I Get to Phoenix," "I Wanna Live," "Wichita Lineman," "Galveston," "Rhinestone Cowboy," and "Southern Nights." Boasting Campbell's smooth vocals and layered arrangements, where steel guitars bounced off sweeping strings, those songs not only became country hits, they crossed over to the pop charts as well, which was appropriate, since that is where he began his musical career. Originally, he was a Los Angeles session musician, playing on hits by the Monkees, Elvis Presley, Frank Sinatra, and Merle Haggard. By the end of the '60s, he had become a successful solo artist, and that success would not abate until the late '80s, when he stopped having radio hits and began concentrating on live performances at his theater in Branson.

Campbell was born and raised in Delight, Arkansas, where he received his first guitar when he was four years old. Learning the instrument from various relatives, he played consistently throughout his childhood, eventually gravitating toward jazz players like Barney Kessel and Django Reinhardt. While he was learning guitar, he also sang in a local church, where he developed his vocal skills. By the time he was 14, he had begun performing with a number of country bands in the Arkansas, Texas, and New Mexico area, including his uncle's group, the Dick Bills Band. When he was 18, he formed his own country band, the Western Wranglers, and began touring the South with the group. Four years later, Campbell moved to Los Angeles, California, where he became a session musician.

Shortly after arriving in California, Campbell earned the reputation of being an excellent guitarist, playing on records by Bobby Darin and Rick Nelson. In 1960, he briefly joined the instrumental rock & roll group the Champs, who had the hit single "Tequila" two years earlier. The following year, he released his debut single, "Turn Around, Look at Me," on the small Crest label; the single reached number 62 later in the year. By the summer of 1962, he had released "Too Late to Worry, Too Blue to Cry" on Capitol Records; the single only spent two weeks on the charts, peaking at 76. While he was tentatively pursuing a solo career, Campbell continued to play professionally, most notably for Elvis Presley and Dean Martin. Also in 1962, he played guitar and sang on "Kentucky Means Paradise," a single by the one-off group the Green River Boys, who released an album, Big Bluegrass Special. "Kentucky Means Paradise" became a hit on the country charts, climbing to number 20. Instead of pursuing a full-fledged country career after the single's release, Campbell returned to studio work, and over the next two years he played on sessions by Frank Sinatra ("Strangers in the Night"), Merle Haggard ("The Legend of Bonnie and Clyde"), the Monkees ("I'm a Believer"), the Association, and the Mamas & the Papas, among many others.

Following Brian Wilson's breakdown and retirement from the road in 1965, Campbell became a touring member of the Beach Boys for several months. At the end of his tenure as the group's temporary bassist, the Beach Boys offered him a permanent spot in the band, but he turned them down when they wouldn't allow him to have an equal cut of the group's royalties. A few months after rejecting their offer, the Beach Boys' record label, Capitol, offered Campbell a full-fledged contract. His first release under his new long-term Capitol contract was a version of Buffy Sainte-Marie's "The Universal Soldier," which peaked at number 45. For much of 1966, he continued to pursue studio work, but he released "Burning Bridges" toward the end of the year, and it climbed to number 18 on the country charts early in 1967.

During 1967, Capitol pushed Campbell as a country recording artist, and their breakthrough arrived in the late summer when his folky country-pop rendition of John Hartford's "Gentle on My Mind" became a Top 40 hit on both the country and pop charts. By the end of the year, he had released a cover of Jimmy Webb's "By the Time I Get to Phoenix," which reached number two on the country charts, and number 26 on the pop charts. Early in 1968, "Gentle on My Mind" won the Grammy Award for Best Country & Western Recording of 1967. Campbell's success continued in 1968, as "I Wanna Live" became his first number one hit and "Dreams of the Everyday Housewife" reached number three. The following year, CBS television hired him to host the variety show The Glen Campbell Good Time Hour, which became quite popular and helped establish him as not only a country star, but a pop music superstar.

By 1972, Campbell's record sales started slipping. After "Manhattan Kansas" reached number six that year, he had trouble having Top 40 hits for the next two years. Furthermore, his television show was canceled. As his career slowed, he began sinking into drug and alcohol addiction, which continued even through his mid-'70s revival. In 1975, he returned to the Top Ten with "Rhinestone Cowboy," a huge hit that reached number one on both the country and pop charts. Over the next two years, he had a number of Top Ten country hits, including "Country Boy (You Got Your Feet in L.A.)" and "Don't Pull Your Love"/"Then You Can Tell Me Goodbye," which also reached the pop charts. In 1977, he had his final number one hit with "Southern Nights," which topped both the country and pop charts.

Following the success of "Southern Nights" and its follow-up, "Sunflower," Campbell stopped reaching the country Top Ten with regularity, yet he had a string of lesser hits and was an immensely popular performer in concert and television. During the mid-'80s, he experienced a brief commercial revival, as the singles "Faithless Love," "A Lady Like You," and "The Hand That Rocks the Cradle" all reached the country Top Ten. By that time, he had begun to clean up his act. Over the course of the mid-'80s, he kicked his addictions to drugs and alcohol and became a born-again Christian. Appropriately, he began recording inspirational albums, yet he didn't abandon country music. As late as 1989, Campbell's smooth, synth-laden contemporary country-pop was reaching the country Top Ten; his last two Top Ten country hits were "I Have You" (1988) and "She's Gone, Gone, Gone" (1989).

Campbell began recording less frequently in the early '90s, especially since he could no longer reach the charts and the radio, since they were dominated by new country artists. Over the course of the decade, he gradually moved into semi-retirement, concentrating on golf and performing at his Goodtime Theater in Branson, Missouri. In 1994, he published his autobiography, Rhinestone Cowboy. Campbell released a comeboack album of sorts, the ironically titled Meet Glen Campbell, produced by Julian Raymond and Howard Willing, on Capitol Records in 2008. In June of 2011, Campbell, by now 75 years old, announced that he had been diagnosed with Alzheimer’s disease. In spite of the ailment, he finished an album, Ghost on the Canvas, which was released in August that same year, and began a tour that was to be his farewell to the music business. ~ Stephen Thomas Erlewine, Rovi