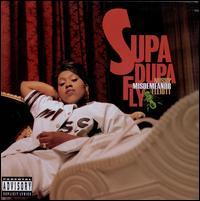 Arguably the most influential album ever released by a female hip-hop artist, Missy "Misdemeanor" Elliott's debut album, Supa Dupa Fly, is a boundary-shattering postmodern masterpiece. It had a tremendous impact on hip-hop, and an even bigger one on R&B, as its futuristic, nearly experimental style became the de facto sound of urban radio at the close of the millennium. A substantial share of the credit has to go to producer Timbaland, whose lean, digital grooves are packed with unpredictable arrangements and stuttering rhythms that often resemble slowed-down drum'n'bass breakbeats. The results are not only unique, they're nothing short of revolutionary, making Timbaland a hip name to drop in electronica circles as well. For her part, Elliott impresses with her versatility -- she's a singer, a rapper, and an equal songwriting partner, and it's clear from the album's accompanying videos that the space-age aesthetic of the music doesn't just belong to her producer. She's no technical master on the mic; her raps are fairly simple, delivered in the slow purr of a heavy-lidded stoner. Yet they're also full of hilariously surreal free associations that fit the off-kilter sensibility of the music to a tee. Actually, Elliott sings more on Supa Dupa Fly than she does on her subsequent albums, making it her most R&B-oriented effort; she's more unique as a rapper than she is as a singer, but she has a smooth voice and harmonizes well. Guest rappers Busta Rhymes, Lil' Kim, and da Brat all appear on the first three tracks, which almost pulls focus away from Elliott until she unequivocally takes over with the brilliant single "The Rain (Supa Dupa Fly)"; elsewhere, "Sock It 2 Me," "Beep Me 911," and the weeded-out "Izzy Izzy Ahh" nearly match its genius. Elliott and Timbaland would continue to refine and expand this blueprint, sometimes with even greater success, but Supa Dupa Fly contains the roots of everything that followed. ~ Steve Huey, Rovi