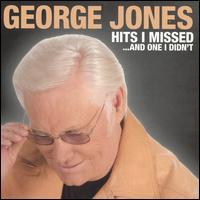 Hits I Missed...And One I Didn't

The idea for Hits I Missed...And One I Didn't is a good one: George Jones looks back over the years and picks songs that he originally declined to record, only to see other artists having hits, sometimes very big hits, with them. This is a clever concept in a couple of ways, since it not only gives a glimpse at what could have been (not just for George, but for the artists who had the hits -- imagine if Bobby Bare never had a big break into the country charts with "Detroit City"), but it gives a strong, cohesive theme for an album, which is something George has occasionally lacked in his veteran years. Working with producer Keith Stegall, who has helmed his records since his lean neo-traditional comeback The Cold Hard Truth, George sticks to simple, straightforward hard country arrangements played by such stalwarts as pianist Pig Robbins and guitarist Brent Mason, and there's a warm, relaxed vibe to this house band of Music City pros that not only gives Jones a comfortable setting, but enhances the material. The songs may span several eras, yet they're all firmly within classic country tradition and while most are well-known standards, there are a couple of nice left-field choices (a version of Hank Jr.'s "The Blues Man" performed as a duet with Dolly Parton; Jack Moran and Glenn Tubb's sublime "Skip a Rope," which was popularized by Henson Cargill) that keep this from sounding overly familiar. The nicest thing about the album is that the arrangements are pure enough that it's easy to envision how these songs would have sounded if Jones had sung them first, but George's performances are those of a veteran who has paid his dues several times over, giving the album a comfortably worn, lived-in feel. Nowhere is that better heard than the one hit that he didn't miss, "He Stopped Loving Her Today," which Jones was not eager to record in 1980 and only cut upon the insistence of his producer, Billy Sherrill. He revisits it here, claiming in his nice track-by-track liner notes that he's "learned to sing it better," and while that point is debatable -- and certainly this recording, as strong as it is, can't compare to the epic original -- it is true that George sings it differently here, finding new meanings in lines that he's sung countless times before. Only the greatest singers can do that, and Jones once again proves here that he is truly one of America's best singers. What's nice about Hits I Missed is that, apart from the clever concept, he's finally given a consistent set of songs to showcase his skills as a veteran singer, and the result is a subdued little gem. ~ Stephen Thomas Erlewine, Rovi