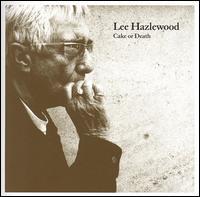 It's supremely fitting that Lee Hazlewood would greet his impending death from renal cancer with an album that expresses a healthy dose of cheery fatalism, the same nature that has kept the listeners of several generations tuned in to his every word. It's also fitting that Hazlewood goes out on his own terms, with no celebrity cameos but help from plenty of unknowns, family members, and old friends. (One of the latter gets a full vocal feature since, in Lee's words, "He literally saved my life some time ago, so this is a promise given and a promise kept.") Hazlewood entered no name studio, allowed no adoring producer or musician from a recent generation onto his record, and shows virtually no patience for writing or producing the type of album that many of his fans -- who are doubtless looking for a snapshot of Lee Hazlewood circa 1967 -- will want to hear. The opener, "Nothing," comes closest, with a suitably wry vocal -- "I took the time to say nothing to her/She took the time to say nothing to me/And in the time I said nothing to her, she said...nothing." Fans will recognize echoes of different Hazlewood eras in these songs, like the stark, proud political/social statement "Baghdad Knights" (a cousin to "José") and a slick weeper named "Please Come to Boston" along the lines of his mid-'70s countrypolitan records (complete with an overripe vocal from Lee's female duet partner). Also, several guests are European, as was Hazlewood himself for a good portion of his post-'60s career. In sound and execution, Cake or Death is a modern-day roots rock record (with the polished touch of Nashville), and Hazlewood's studio team finds no trouble moving from loping (Western) swing to red-hot rock & roll. Two of his biggest production hits get new airings as well; "Boots" has a jaunty bounce to it, but the ragged guitar and upright bass definitely mean business (that's none other than Duane Eddy on six-string). The other is his eerie anthem to the twilight, "Some Velvet Morning." Although it begins as powerfully as the original, it's only a minute and a half long, and it's included only because Hazlewood's granddaughter Phaedra thought it was written for her and wanted to sing it on his album. That's Lee Hazlewood to the core -- no concessions to his past or music's present, and no worries about the future. ~ John Bush, Rovi